1991: Sports Illustrated does a feature story on Mike and Tony.

1991 & 1994: Rick Doyle puts together some of the first CD collections of watersports photos available for royalty free use. Photos of Klarich show up on an Orange Julius poster, Valentine’s Day Cards, a Ron Jon Billboard in Florida, and more. 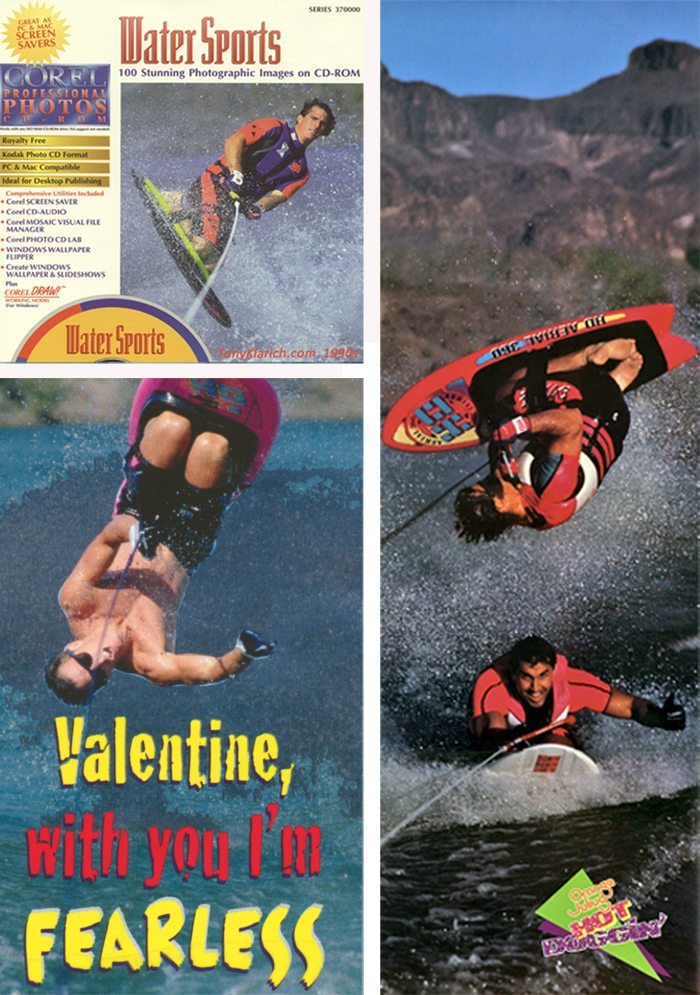 1993: Klarich designs the Joker for HO. It goes on to become the top selling compression molded kneeboard of all time. 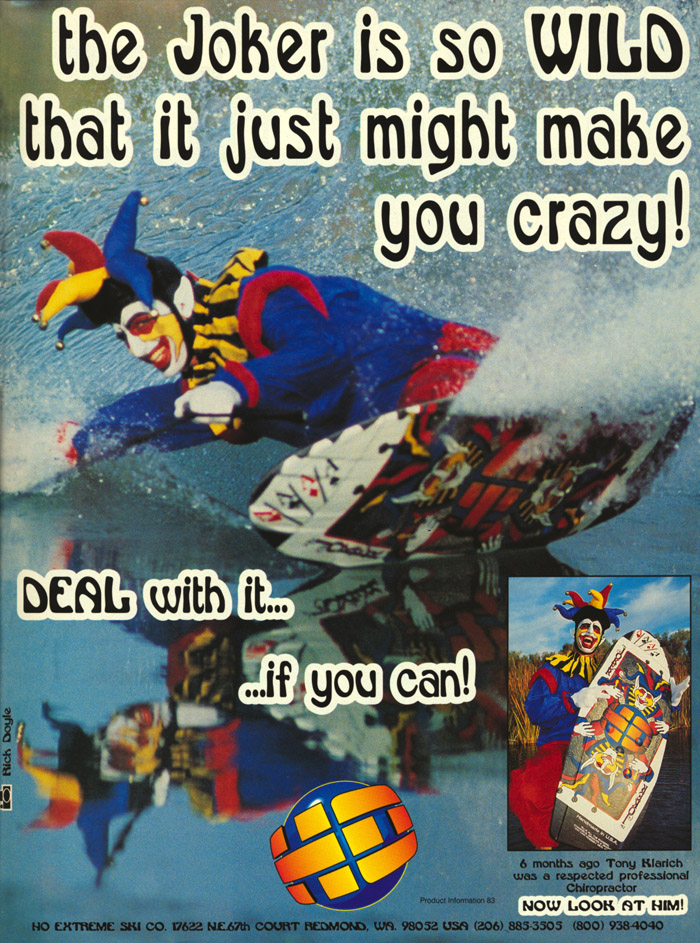 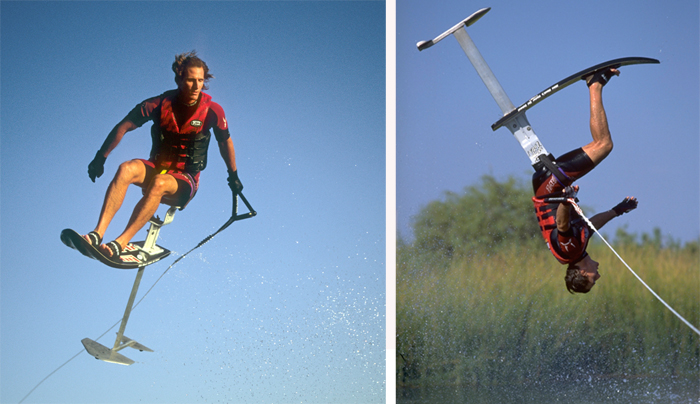 1995: Tony and uncle Mike go back and forth extending the consecutive flip record in one ride without a fall. Murphy: 150 on a fun run. Klarich: 253 when challenged by Mike to do 100 more. Murphy: 708 showing his nephew who is the king of consecutive flips. 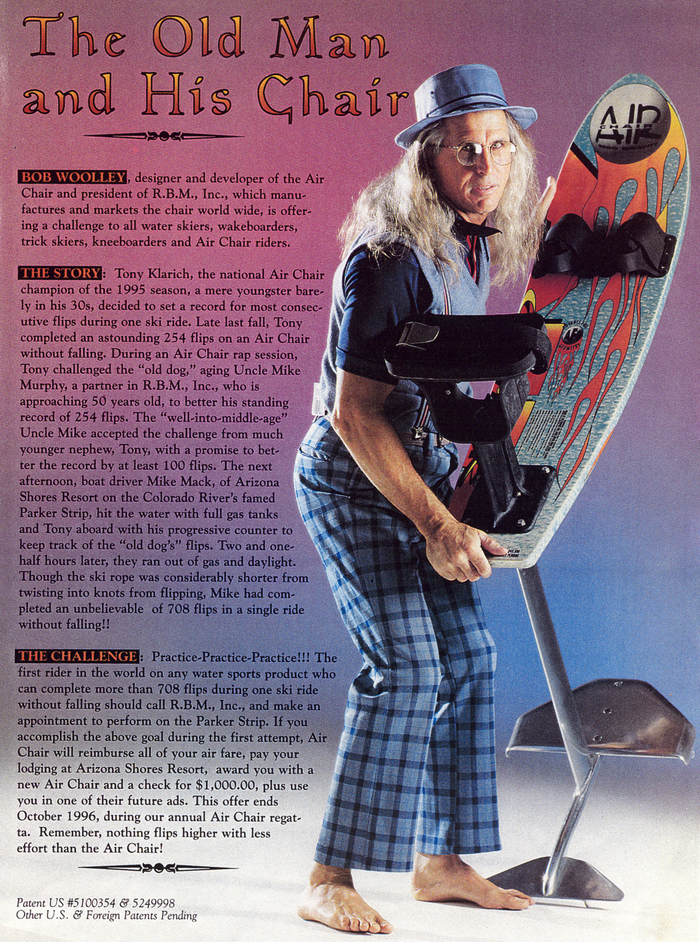 1997-2001: Klarich publishes and designs 16 quarterly issues of a hydrofoiling newsletter documenting the development of the sport.

1998- 2008: Klarich joins a team of international watersports performers putting on a series of shows from Moscow to Monaco. The series of about 10 shows is most often in conjunction with jet ski Nationals and Worlds, and is paid for by Vladimir Potanin, one of the richest men in the world. 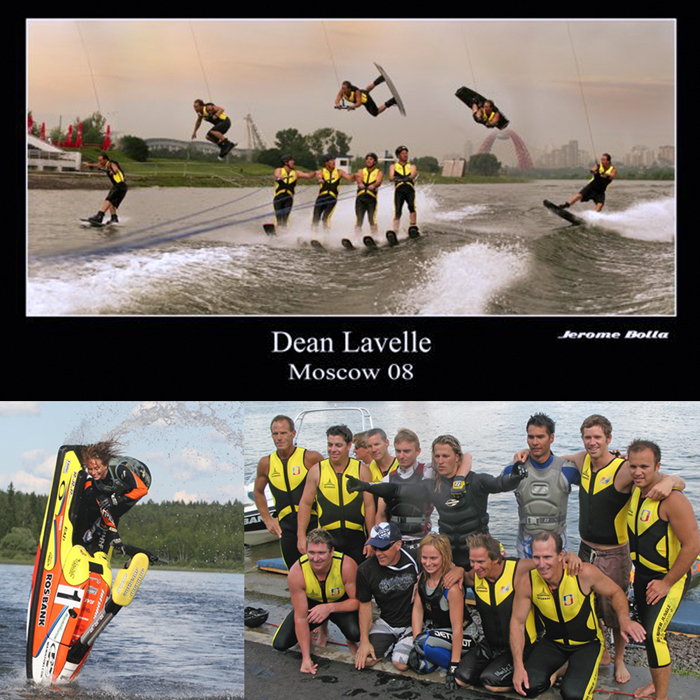 1999: WaterSki magazine names Klarich as top hydrofoiler alongside other “masters of the wide world of water sports” such as Andy Mapple (slalom), Shaun Murray (wakeboarding), Ron Scarpa (barefooting) and Cory Pickos (trick skiing). Klarich is also tapped as top tuber after completing the Catalina Ski Race on a tube in just over 2 hours. That’s 52 miles of racing in open-ocean with scores of other racers. 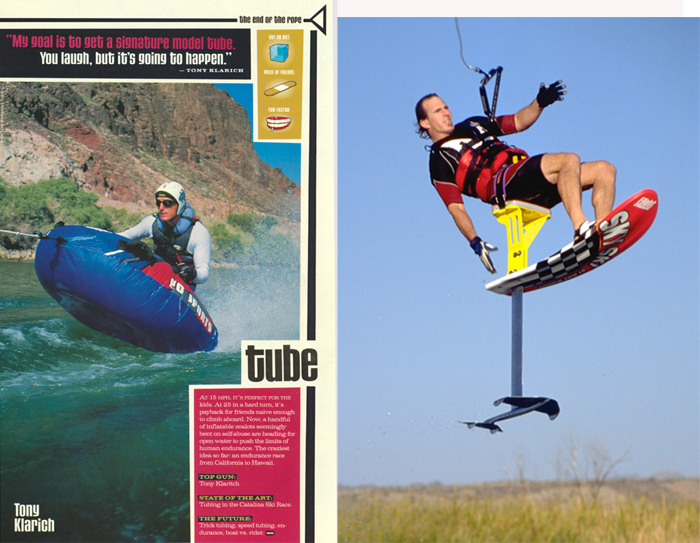 Flight Worlds 2000 is a $100,000 event hosted by Klarich and Chuck Sacks of California Skier. The extreme event, televised on ESPN and ESPN2, combines the world’s best hydrofoilers with wakeboarding, and freestyle motocross from the Metal Mulisha. 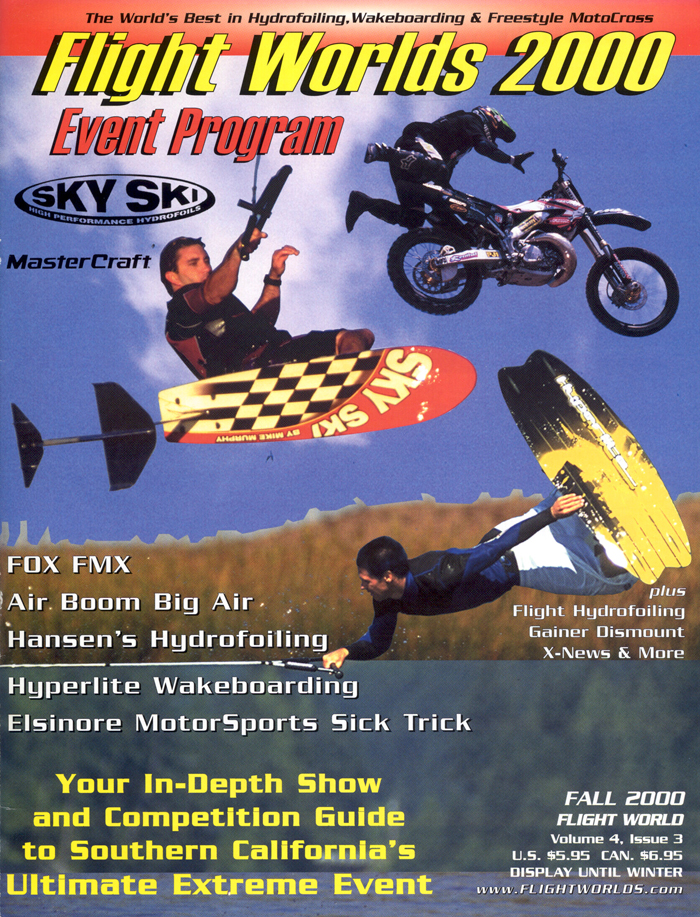 1987-2002: With control of his own with photos, Klarich hustles to get hundreds of pages of editorial coverage in watersports magazines around the world. 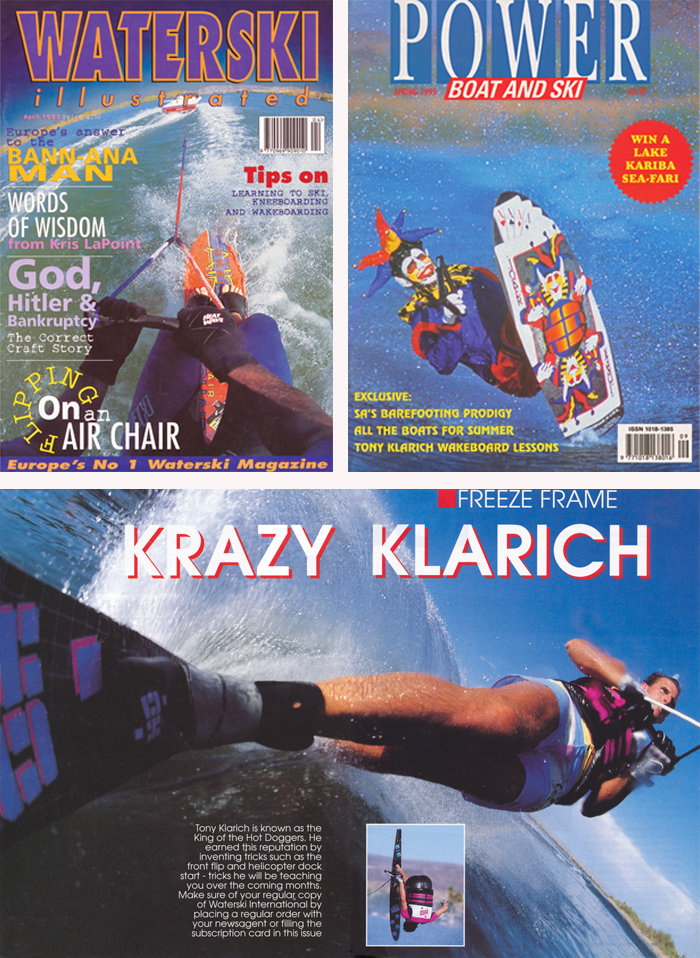 2004:  Mastercraft 40-40-400. It all started as a birthday stunt. Tony’s grandmother Mary Murphy rode her hydrofoil across open ocean to Catalina Island at age 79. For the next 8 years she rode there and back – 52 miles dodging sharks and dolphins – to celebrate each birthday in her 80s. When it came time for Tony’s 40th, he decided to do a ski challenge too, just like grandma. So he set out to ride 40 miles on 40 different things and did 400 tricks, all in one day.

2008: Klarich produces, directs, edits, and writes the script for his uncle’s life story in water skiing. The 35-minute biopic tells the story of one of the greatest all around watermen ever to strap on a binding. The DVD is produced to share with the American Water Ski Educational Federation in an attempt to get Mike into the Water Ski Hall of Fame. Soon after Mike Murphy receives the “Award of Distinction” for his “extraordinary contributions” to the sport.

Adventures in Kneeboarding (each chapter as an individual blog post)

Adventures in Hydrofoiling (each chapter as an individual blog post)

2010: Klarich begins a concerted effort to post quality water ski content on YouTube, much of it centering on history and instruction. Many of Klarich’s videos are linked to his “Adventures in Water Skiing” series. Readers can learn about a particular milestone in the sport, then instantly click to watch a related video.

2011: While searching the net for royalty free music to use for his YouTube videos, Klarich stumbles across musicians giving away songs to use for free via a Creative Commons 3.0 license. The thought that strangers would give away content for free inspires Klarich to do the same with his extensive collection of water skiing images spanning more than 3 decades. 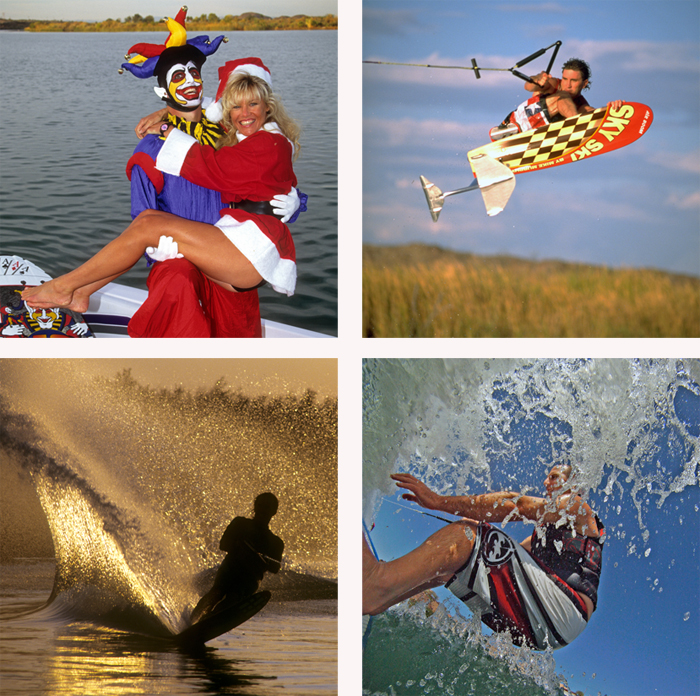 2011: Klarich starts CrossFitting to prepare his mind and body for 50 different rides in one day (50 for 50). The training is a physical and mental boost. A short time later he is featured on the CrossFit.com home page as the photo of the day. 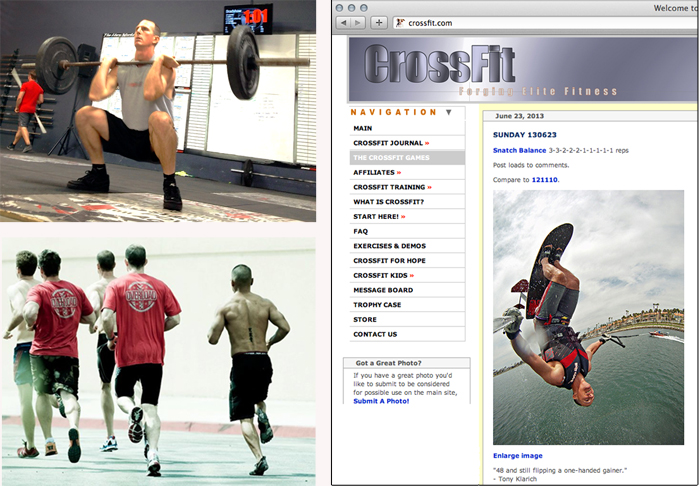 2013: Klarich become a website developer for his uncle Mike. WaterSkiingHistory.com documents Mike’s life in skiing in a way rarely seen in skiing, even with well-known riders. Klarich continues with NextFoils.com to promote his uncle’s reentry into the hydrofoiling business. 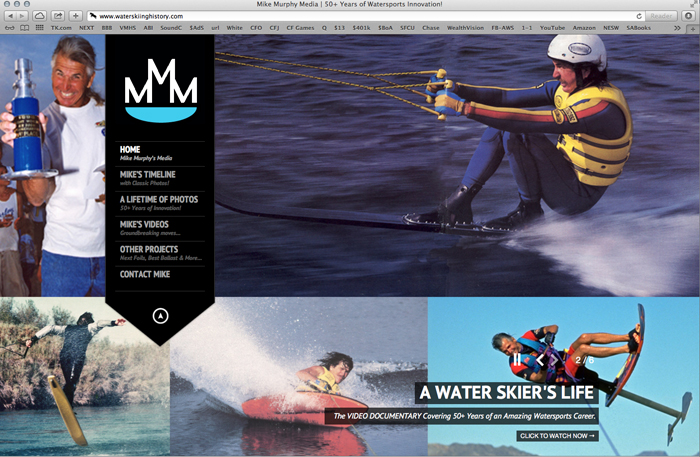 2013: Time off from riding, and increased physical abilities from CrossFit invigorate Klarich. He begins training for his “50 for 50” in earnest. He continues to explore new ways to ride and finds new angles to capture all the action. 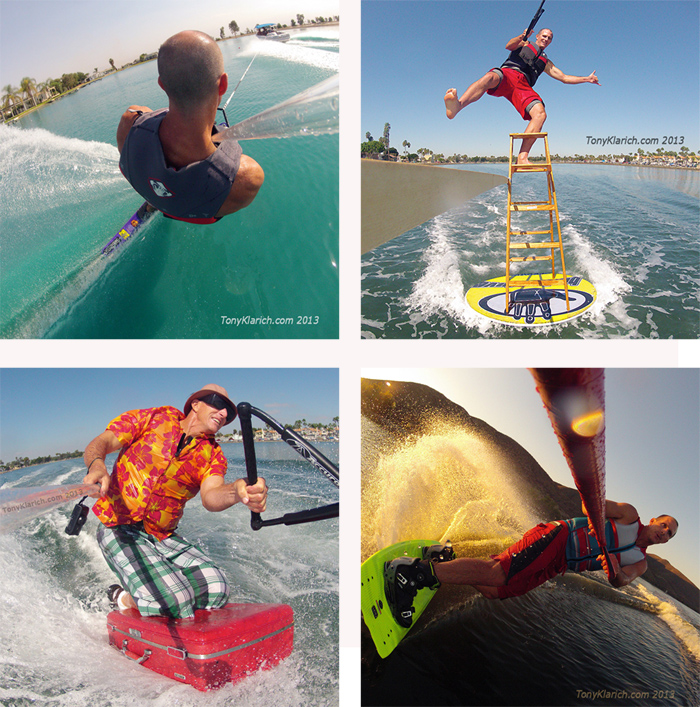 2014: Klarich begins blogging at WaterSkiersLife.com, covering the history of towed watersports and much more.

2014: As Tony prepares for his “50 for 50” he posts many of his unique rides @waterskierslife on Instagram with great success. 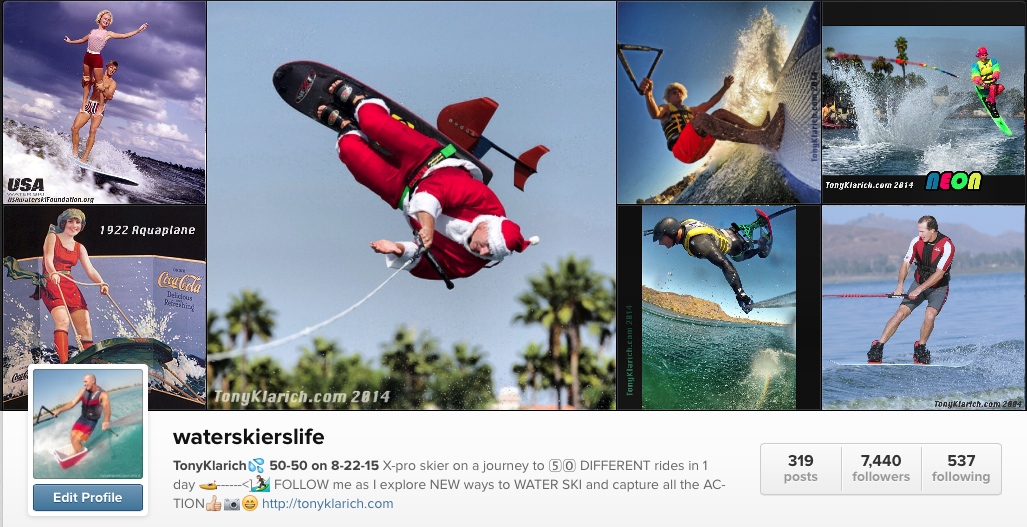 2014: Tony Klarich named to the Wakeboarding Hall of Fame (WHOF) founding Board of Directors. 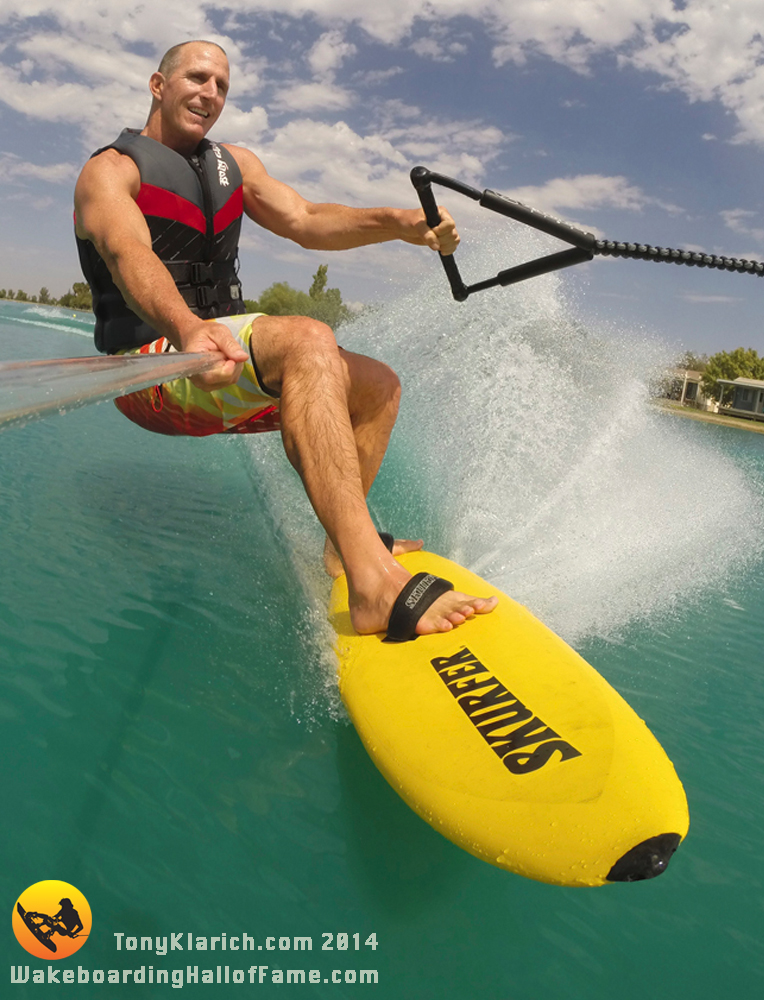 2014: Tony and his uncle Mike Murphy  produce a series of 24 free videos on how to hydrofoil. 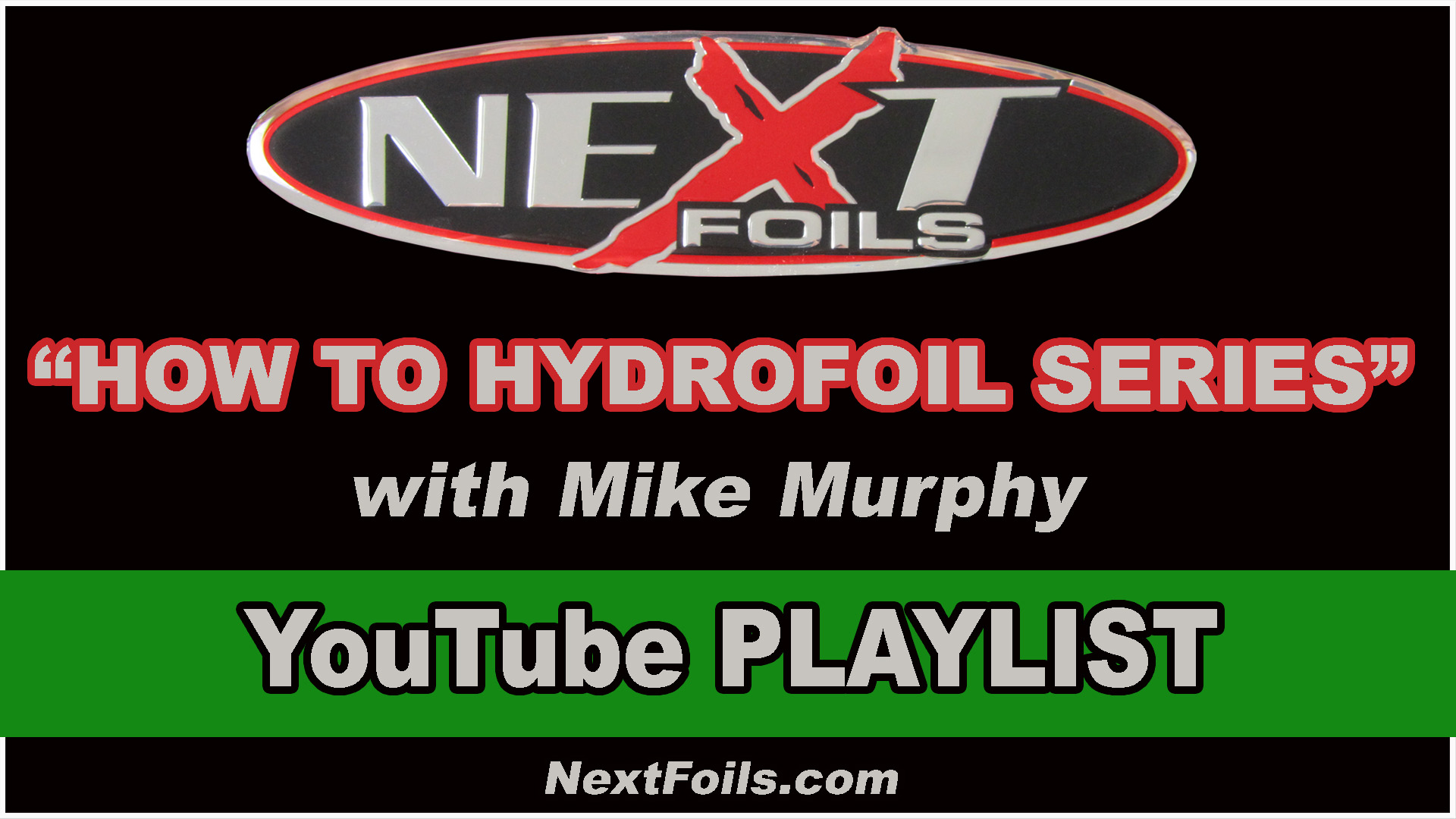 After falling in love with the HO Freeride, Klarich recaptures long lost tricks on a slalom ski, include the 720 tick tock landing (watch the video)

2015: Klarich named to HO Legends Team along side Bob LaPoint and Wade Cox. 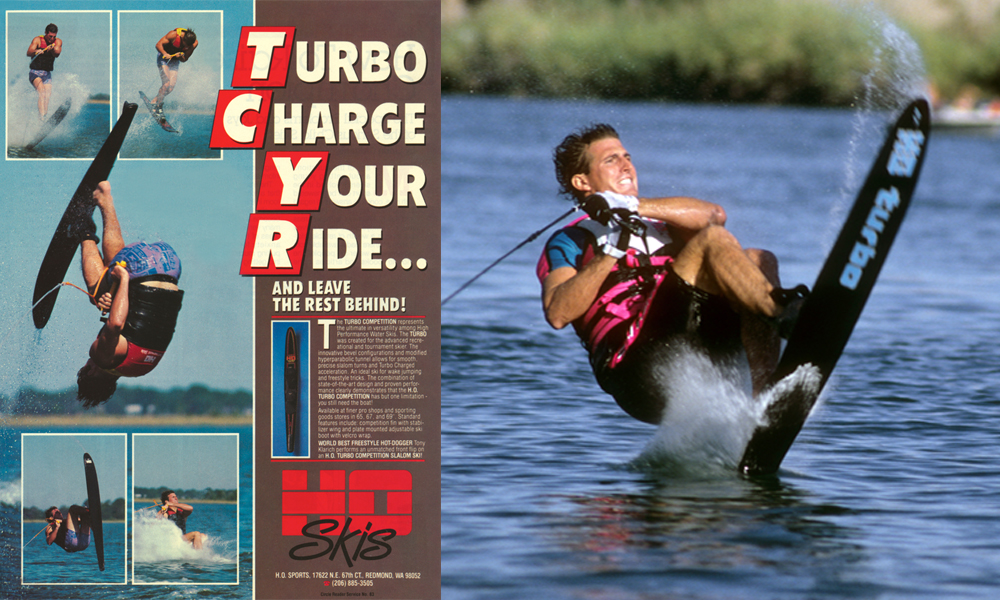